Climax’s latest version of the ATV series is a great combination of grueling competitive racing and stylish insane tricks. Burning around an offroad track with 5 other riders all jumping and smashing their hardest to get the advantage will have you swaying in your seat and shouting expletives at your competitors. But you’ll also be looking out for those opportunities when you’ve caught enough air to give you the time to do a bit of showboating. Tail grabs, heel clickers, scorpions and numerous other tricks can all be built up into combos to wrack up a high stunt score too. The extra points are then converted into credits so you can modify your ATV in the new garage mode, with more than 20 customisable parts and components. 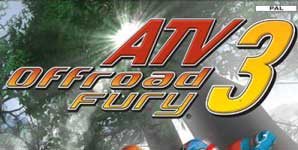 There’s a very decent 40 environments to tear your way around and the 6 different terrain types mean you’ll have to adapt your driving style or you’ll be flying off at the first hairpin. As you progress through the Championship there is a multitude of things to unlock along with 25 highly detailed ATV’s to try out. But don’t worry, it won’t matter too much if you’re not big into your quad bikes as its easy to get to grips with the garage menu’s to get what you want out of your racing machine. You can get creative and as detailed as you want to with the option to change colours, logos and peripheral parts of the bike to get it looking just how you want it.

Different race types and even a free roaming mode give the game a good range of variety. If you get tired of constantly being pipped at the line in one of the races then you can move away to the freestyle mode where you’ll be against the clock to complete a set of objectives. Building a high stunt score or collecting targets around an arena is a refreshing change and will appeal to those who are also fans of Tony Hawk games.

Key to being successful is mastering pre-loading; this basically involves rolling the left analogue stick back and then forward as you leave a jump. If you time it correctly you fly off the dirt mound giving yourself an advantage over your rivals, but it also gives you longer air time to pull off some stunts. Learning the most effective route around a track is vital as you don’t want to shoot off every incline or you’ll end up flying into the Grandstand. Sometimes it pays to miss a jump out so you can make the most of the following one and you don’t always have to stick rigorously to the course as there are plenty of shortcuts to make the most of as well. As you may have guessed this isn’t a game that’s all about speed, but that doesn’t mean you won’t be zipping around the dirt at full throttle because it gets fast and furious when you link together perfectly timed jumps and landings. Once you get to grips with handing your ATV in the air it gets a lot more fun and thanks to the training mode it doesn’t take long at all.

The graphics are ok, nothing revolutionary but realistic enough to give you a good idea what some nutters do for real. There’s some nice extra touches such as wiping mud from your goggles or waving an angry fist which add to the atmosphere but it does feel slightly bog standard. (Maybe I’ve just been looking at the next generation games too much). The lively punk rock soundtrack is what you’d expect but they certainly haven’t gone to town with the Sound FX. The engine sounds a bit too much like a bee trapped in a balloon rather than a growling monster.

There’s a lot I really like about Off Road Fury 3 but unfortunately there seems to be something missing or not quite spot on to make it a classic game. Handling is sometimes a little frustrating; slightly miss-timing a tight corner or getting your landing spot wrong will slow you right down. But, there’s satisfaction when you string together a perfect run and really start hammering it with style. The tricks look sweet and are easy enough to master and without them the game would fall into the depth’s of below mediocre. Thankfully though there is more than enough to keep this game well out of that zone. A good selection of race types; enduro, supercross, national, freestyle, and short track events plus minigames and multiplayer option make this a versatile little puppy. You may not be playing it in a year’s time but you’ll certainly get enough entertainment value from it to make it worthwhile grabbing a copy.