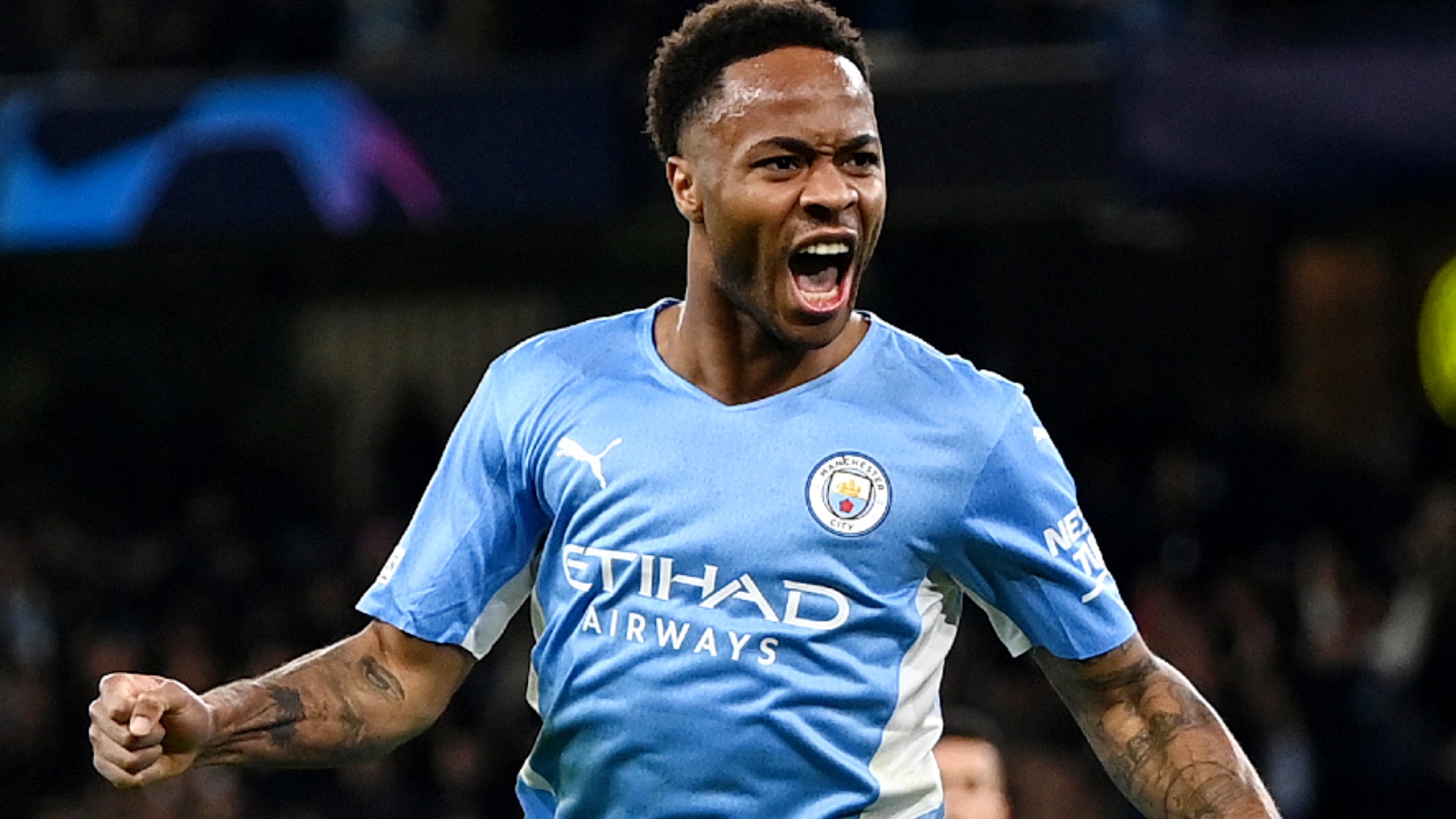 Manchester City will finish ahead of fellow tournament favorite Paris Saint-Germain after winning a titanic Group A showdown 2-1 that still saw both clubs mathematically advance to the knockout stage with one match remaining. PSG took the lead in the match through Kylian Mbappe, but goals by Raheem Sterling and Gabriel Jesus overturned the result in favor of the defending English Premier League champs.

A loss by Club Brugge in the other Group A match ensured that both Man City and PSG advanced, but finishing in first place will be important come the Round of 16 draw: It means Man City will be a seeded team and will be drawn against a group runner-up. It will also play the second leg of the Round of 16 at home, which is perceived to be an advantage in case extra time and penalty kicks are needed in the second leg.

But an early second-half goal by Mbappe had PSG thinking it could take the top spot in Group A and beat Man City for a second time in the group stage. A cross by Lionel Messi from the left found the French star and his shot went through the ‘keeper’s legs for the 50th-minute lead. It didn’t last long. Sterling and Jesus both poked home crosses in the PSG box in a span of 13 minutes and Man City saw out the win.

MORE: All you need to know about the Round of 16 draw

Man City showed off its trademark possession game, but could not take advantage in the first half despite several looks at goal. Quality defending, timely blocks and solid saves from PSG kept them off the board. Meanwhile, it always felt like PSG’s star attacking trio had a moment of magic in them and Mbappe showed it on his goal in the second half. But Man City’s sustained pressure and penetrating runs proved too much to handle.

84th min.: With just minutes remaining it feels like Man City are closer to a third than PSG is to equalizing. But the PSG attackers need just a moment of magic.

76th min.: Goal Man City! Riyad Mahrez lofts the ball to Bernardo Silva on the left side of the box and he touches it to Gabriel Jesus who just guides it into the goal. It’s 2-1 Man City.

74th min.: What a chance for PSG! A spectacular sequence from PSG’s attackers, combining quickly, releasing Neymar in the box, but he couldn’t get his shot on target. Brilliant play from PSG.

67th min.: SUBS – PSG brings on Thilo Kehrer for left back Nuno Mendes and Angel Di Maria for Idrissa Gueye as PSG moves to a 4-2-3-1 with Neymar-Messi-Di Maria behind Mbappe and Paredes-Danilo alone in midfield.

63rd min.: Goal Man City! Rodrigo sprays it wide to right back Kyle Walker, who made a run into the box. Walker’s cross makes its way to Raheem Sterling, who pokes it home for the 1-1 equalizer.

61st min.: SUB – After PSG was furious that Man City didn’t put the ball out of play for the injured Ander Herrera, the sub comes in. Midfielder Danilo is in the game.

55th min.: YELLOW – Rodri picks up a yellow, but it looked like a dive by PSG’s Leandro Paredes. It was tough to spot any contact on the replay.

50th min.: Goal PSG! Quick combinations among the PSG attackers and Lionel Messi’s cross from the left makes its way to a wide-open Kylian Mbappe who fires between Ederson’s legs for the goal. PSG moves to the top of the group with this result.

46th min.: Second half is underway. And only an offside thwarts an early Gundogan chance on a Rodri pass.

Halftime: This match has gone to script so far and Manchester City will be disappointed not to come away with a goal from that first half. The home team definitely created more with its possession, but solid defending by PSG kept them at bay. PSG is always lurking, however. The visitors look like they can find a goal at any moment on the break and Man City seems vulnerable in the back. Meanwhile, with RB Leipzig pummeling Club Brugge 4-0, both teams will be secure of advancing to the knockouts. It’s down to which of the two giants will finish in first place.

43rd min.: It’s a 3-on-2 break for PSG and it’s Kylian Mbappe who takes the final shot but he tries the curler to the far corner and it’s off the mark. Should’ve probably done better there.

33rd min.: Man City with three straight looks at goal! First a Bernardo Silva cross in the box is deflected right to goalkeeper Keylor Navas. Moments later, a Joao Cancelo cross deflects to Gundogan who hits the post. Then another curling Riyad Mahrez shot is saved for a corner by Navas.

28th min.: Good play from Man City and Marquinhos blocks a Zinchenko first-time shot in the box. Meanwhile, RB Leipzig goes 3-0 up at Club Brugge. PSG and Man City should go through to the knockouts today.

How many blocked shots is that by PSG. These guys need helmets.

25th min.: PSG is seeing more of the ball, but Man City is more purposeful with it. Riyad Mahrez seems up for it and Rodri is very much involved.

18th min.: Another last-ditch clearance by PSG! This time it’s Achraf Hakimi heading away for a corner on a patented curler from Riyad Mahrez.

17th min.: Good attack by PSG that ended with a Lionel Messi shot, but it’s foiled by an offside. Meanwhile, RB Leipzig is now up 2-0 on Brugge.

12th min.: Update from the other match — RB Leipzig takes the 1-0 lead on Club Brugge. If that result holds, both Man City and PSG are through regardless of the result.

9th min.: The match is being played at a measured pace, obviously controlled by Man City in possession.

5th min.: Early chance! After a free kick earned by Riyad Mahrez wide right, Rodri’s header in the box is cleared off the goal line by Presnel Kimpembe.

1st min.: The match is underway. We’ll also keep an eye on Brugge-RB Leipzig given the impact on the Group A standings.

It’s somewhat of a surprise lineup after manager Pep Guardiola previously indicated that a few players were carry knocks. Phil Foden is not in the squad, Kevin De Bruyne (COVID-19) was already out for Manchester City, while Jack Grealish missed training on Tuesday and didn’t recover. Ferran Torres is still a long-term injury absence.

According to L’Equipe and Canal Plus, midfielders Marco Verratti (quad) and Georginio Wijnaldum (knee) were unavailable to start for PSG after picking up injuries in Tuesday’s training session. But the big news is that summer signing Sergio Ramos will be in a PSG matchday squad for the first time since joining the French club. The 35-year-old center back won’t start, but he could be a late sub who helps to close out a result.

How to watch Manchester City vs. PSG

The match from a sold-out Etihad Stadium in Manchester will be broadcast live on TV on Univision and TUDN. Both channels are available to be streamed on fuboTV , which is available to new users on a free 7-day trial.

The match will also be available in English for Paramount+ subscribers.

In Canada, the Champions League is available exclusively,  live and on-demand, on DAZN . And DAZN offers new customers a 30-day free trial period.