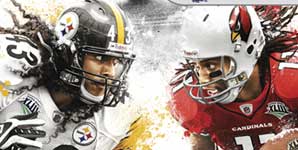 Every summer culminates in the release of Madden NFL and it has become an annual holiday for millions of football fans,” said Nathan Stewart, marketing director at EA SPORTS. “No matter if you’re looking for a realistic football simulation, or a family-friendly NFL experience, Madden NFL 10 represents the best of the award-winning franchise.”

Madden NFL 10 brings something for everyone. Experience first-hand what it’s like to “Fight for Every Yard” in Madden NFL 10 for Xbox 360© video game and entertainment system and PLAYSTION©3 computer entertainment system. With all new Pro-TakT animation technology, players have more control over the outcome of each play. Add to that the most immersive broadcast presentation and online innovation in franchise history; if you see it on Sunday, you’ll see it in Madden NFL 10.

This year, Madden NFL 10 arrives on the Wii with breath-taking visuals that will captivate both seasoned veterans and new comers to the franchise. Completely redesigned and built from the ground up, Madden NFL 10 epitomizes what fun looks like on the Wii , delivering the most social and dynamic experience from the franchise to date. Quick, exciting game modes ensure that anytime is the right time for Madden NFL 10 on the Wii .